The Man on the Tyne Bridge 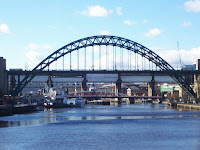 It was a hot summer day and the sky was clear and sunny over the city of Newcastle-upon Tyne.  A gentle breeze was blowing and the freshness of the weather cast a magical spell on the sun-seekers who escaped from their homes and office buildings.  And out they came in hundreds into the parks.   Some chose just to sit down, sip orange drinks and relax in the pavement cafes: others took the opportunity to roam around with no fixed destination in mind.  The warmth of the weather was so welcome to people that they came out to soak up the sun to their hearts’ content.

The majestic Tyne Bridge was silhouetted in the sky like a painting on a broad canvas and was a popular place for a stroll.  The river Tyne invited me towards her bank and I noticed the crowd assembled on the bridge and traffic on the approach road was unusually heavy.  As I walked towards the lower level of the bridge I sensed that the whole atmosphere was charged with an air of expectancy.  I also saw that several thousand pairs of eyes were focused upwards as though some unusual event were taking place at a higher level almost touching the skyline.

It was not easy to make my way through the crowd as there were people jostling everywhere to find a vantage point.  I became curious to know what was it that engrossed so many people.  I met an elderly woman who was busy restraining her little puppy.  The poor dog was visibly frightened by the commotion.  I was the woman what the huge crowd was after and what was happening.  She drew my attention to the topmost point of the bridge.  What I saw was a tiny male figure perched precariously up there.  The woman told me: “That man has been seen up there from early morning and he is in no mood to climb down.    No one knows exactly knows what his real intention is and when he might come down”.  A passer-by, aiming his comment to one in particular, said loudly, ”He is probably going to commit suicide by jumping into the river.  I wonder what is holding him back.  He has no chance of survival from that height”.

So that was the main attraction which gave an additional boost to the imagination of the public.  They all were there to enjoy the show which was laid on free for their amusement.  The public would even forego other duties but would not miss this entertainment, however tragically might it end.

Looking around, I could see a band of helmeted policemen who were working hard to control the crowd and make a passage for an ambulance to drive through.  A fire engine was standing by but even its fully extended ladder could not reach the man on the bridge.  I heard a voice saying that a rained social worker was up there to persuade the distraught man to climb down but he failed, the wretched man was determined to take his own life.  I heard also that when the social worker came closer to the man his own life was in danger because the man threatened to push him off the arch.

All attempts to persuade the man to climb down failed and the police resorted to a waiting game, leaving the man to his whims.  Undisturbed, the man stayed-put high up on the arch and down below the crowd waited patiently for the moment to arrive when he would jump to his death.  A sightseer peering through his binoculars alerted the public because he saw the figure make some movement but it was a false alarm and spectacular did happen.  Video cameras were held in readiness to capture the last few moments of his life.  Ice-cream vendors, Doughnut-sellers and Hot-Dog men did a brisk trade. They provided the much needed munching and nourishment to the crowd tired and exhausted after hours of suspense, waiting to see the man plunge into the river to meet his watery grave.

At about 4 O’clock in the afternoon the show was over.  The man was seen cautiously crawling down the span of the bridge.  All the waiting to witness a man’s fatal jump had been in vain.  When he reached the bottom of the rail, a uniformed man grabbed him and helped him to the waiting ambulance.  The assembled crowd began to drift away indignantly.  Having been denied a great treat they felt they had been cheated by the man on the bridge.  I heard one frustrated youth shout out: “Why did he not jump?  Why did he keep us for nothing?  His climb down is a disgraceful.  The man must be a coward.”  His view was shared by dejected and disappointed spectators who then made their way back home.  Normality and sanity returned to the vicinity of the Tyne Bridge.

My account of the event that took place on the Tyne Bridge is significant because its theme is similar to that of Somerset Maugham’s fictional short story ‘Gigolo and Gigolette’.  In Maugham’s story, Stella, a performing artist of a Casino, entertains guests with her dangerous act of diving from a sixty feet high platform into a shallow, five feet deep flaming tank.  The spectators gather over and over again expecting that one day Stella will kill herself in her act, just like the huge crowd waited in expectation that a man would jump from the Tyne Bridge to take his own life.  Maugham’s story illustrates that a fiction often mirrors what happens in reality.

Posted by a quarterly spiritual e-magazine. at 3:01 AM