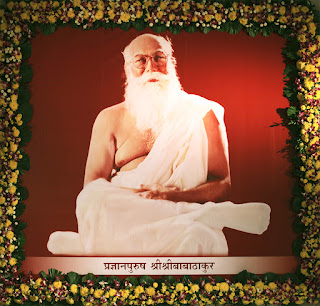 The following is the second and concluding part of an article describing the satsang event held on the eigtheenth of November, 2011 at the Sanatan Dharm Mandir in Greater Kailash – Part 2, New Delhi to commemorate the second anniversary of Sri Sri Babathakur’s departure from His mundane existence.   The first part of this article was published in the 2012 Saraswati Puja issue of e-Sanai and included a narration of Sri P.C. Lahiri's introductory address to the audience, speeches by Dr. Dipak Patranabis and Advocate D.K. Rustagi, and Sri P.C. Lahiri's description of the Saccidananda Society and its mission.  Those interested, can access the first part of the article through the following link:

Following his description of the Saccidananda Society and its mission, Bapida (Sri P.C. Lahiri) proceeded to introduce Sri Karamjeet Singh as not only an award-winning and highly accomplished filmmaker (who specializes in making films related to the Himalayas), but also as a deeply spiritual person, who akin to a ‘bhakt’, dedicates his entire focus towards whatever task there is on hand.   Much as in the case with Sri Rustagi, Sri Karamjeet Singh’s outlook on spiritualism took a wonderful and remarkable turn since the commencement of his association with Sri Sri Babathakur.  Being blessed with the opportunity of interacting with Sri Sri Babathakur’s, Mr. Singh has gone on to make a film on the words and teaching of the Master titled ‘I-Witness’, which is currently being reviewed for clearance by the Censure Board.  Bapida invited Mr. Singh onto the stage to share some of his spiritual views and experiences with the audience.

After thanking Bapida and greeting the audience, Sri Karamjeet Singh begun by stating that he hadn’t initially approached Sri Sri Babathakur to receive any specific spiritual knowledge or help.  His interest in Sri Sri Babathakur was purely as a filmmaker tasked with shooting a documentary based on the teachings of the Master.   Sri Singh claimed that as a filmmaker, he is inclined to thoroughly scrutinize and assess his subjects rather than blindly believing anything said or written about them.  He has over the course of his career, encountered many spiritual masters, yogis, sages etc. without particularly being impressed by any of them.  However with Sri Sri Babathakur, his experiences were vastly different.  The first thing that struck him about Sri Sri Babathakur was that the Master was in the least bit interested to force His spiritual beliefs onto others.  He harbored no desire to set up any ashram, recruit disciples, or launch a fund drive to help spread His message.  It was (like Bapida had described earlier) as if Sri Sri Babathakur was like the sun, ready to illuminate the spiritual life of anyone interested in the ultimate goal of Self Realization - to whatever extent he/she was capable and willing to partake of His teachings. 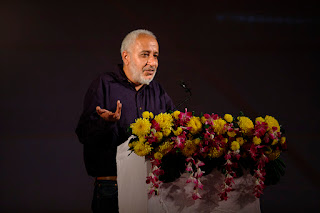 Over the course of his interactions with Sri Sri Babathakur it became very evident to Sri Singh that the Master was completely devoid of duality.  Sri Sri Babathakur believed in the unity of the essence underlying all views and concepts, and never stated that one must follow a specific path to make spiritual progress.  For Him, there were several paths through which one could attain the ultimate goal of Self Realization.  One could just as well attain Self Realization by treading on the path Karma Yog (i.e. by being totally dedicated to one’s craft and doing every task to the best of one’s abilities) as one would by taking the route of Bhakti Yog.  Sri Sri Babathakur did say though that there is one path that’s the most direct or shortest path to attain Self Realization – and that is the path of Knowledge.  However given that it’s a shortcut that directly leads one towards Realization, it is also the most challenging of all paths.   Sri Singh mentioned that by ‘Knowledge’, the Master wasn’t referring to anything that can be gained or perceived through the mere senses or intellect.  Upon asking Sri Sri Babathakur how to gain this Knowledge, Mr. Singh was told to ‘Just listen’.

This is what Sri Singh proceeded to do (i.e. ‘just listen’ without any preconceived notions) in subsequent interactions with Sri Sri Babathakur.  He found the Master using different approaches to illuminate a seeker’s understanding of the many facets of an individual’s ultimate spiritual objective.  Mr. Singh referred to the story of the blind men and the elephant - with those of us possessing limited and imperfect spiritual knowledge being akin to the blind men (i.e. being able to comprehend only a part of the elephant called ‘existence’), and the Master (given His Realization) being able to see the whole elephant.  Over time and through various tangents, Sri Sri Babathakur provided Sri Karamjeet Singh with a bigger and clearer picture of what this elephant called ‘human existance’ is all about.

Sri Karamjeet Singh concluded his speech by stating that he still fondly recollects his interactions with Sri Sri Babathakur, occasionally reads his books, and tries to incorporate the Masters teachings in his day-to-day life, particularly those related to Karma Yog, which he himself (i.e. Sri Singh) is naturally drawn to.

Bapida thanked Sri Karamjeet Singh for sharing his experiences in a very direct and open way, stating that the listeners are always appreciative of and inspired by listening to the ‘direct experiences’ of bhaktas.   Emphasizing further upon the nobility of having an ‘open’ nature, Bapida referred to Sri Sri Babathakur’s occasional play with certain words such as ‘disease’.    The word ‘disease’ can be broken down into ‘dis’ and ‘ease’.   All of us (who are not Self Realized) are afflicted with some form of ailment – and this disease may not necessarily merely of the physical kind.   Only someone who is completely open and at ease with one and all, one who is not constricted/limited by any particular thoughts or opinions about others, can be said to be well set towards attaining the objective of Self Realization.

Bapida next drew the audience’s attention towards a very special characteristic of Sri Sri Babathakur – that of devotional songs or bhajans being spontaneously and effortlessly revealed to Him - complete with sur, taal, chand, and laya.   These revealed bhajans were never the outcome of a certain musical training, focused thought process, or effort.  They came naturally and spontaneously to the Master under certain circumstances, such as when deeply immersed in ‘Atma-bhaava (i.e. deep identification of All with the Self), coming out of Samadhi, during a state of deep relaxation, or when responding to the sincere adyatmic jigyasa (i.e. spiritual curiosity) of a seeker.   Bapida then invited three versatile and highly accomplished musicians – Mrs. Shaoni Mitra, Mr. Debashis Ghosh, Mr. Pritimoy Goswami to come onto the stage and render some bhajans that had been revealed to Sri Sri Babathakur.   Each of these musicians has been associated with the Master and performing His bhajans for the last twelve years.  This close association with Sri Sri Babathakur and the rendering of His works has had a profound impact on both their personal and professional lives.  With the passing of time, each has found himself/herself being increasingly drawn to the spiritual path, and dedicating more and more of time and effort towards communicating the spiritual insights of the Master by means of His revealed bhajans.  Mrs Mitra (singing vocals), Mr. Ghosh (on harmonium) and Mr. Goswami (on tabla) beautifully delivered a set of 3 bhajans, with Bapida narrating the words of each bhajan (as well as discussing their significance) prior to its rendition.   This set of bhajans included ‘Anand Se Bhajo Man’, “Mere Pritam, Mere Pritam’, and ‘Atma Ram Atma Ram’. 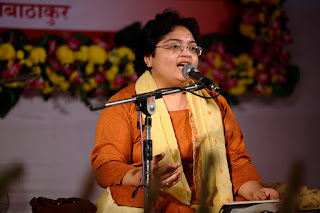 Following the recital of the words to the bhajan ‘Mere Pritam, Mere Pritam’, Bapida mentioned that these words (all in Hindi) serve as fine examples of the fact that ‘Direct’ Knowledge or Experience has limited use for (i.e. is not dependent upon) formal education or training.   Given Sri Sri Babathakur received no formal training in Hindi, the revealing of such bhajans to Him came as the natural and spontaneous outcome of having attained the highest form of Consciousness.

Following the rendition of the aforementioned bhajans, the audience was treated to the Keynote speech of the evening delivered by Swami Kinkar Samanand Maharaj ji.   Swami ji had earlier that day delivered a brief speech at the Moksh Dham in Delhi as well.  Bapida introduced Samanand Maharaj ji as both a rishi and a sanyasi, highly accomplished and well revered within the spiritual community.  He is a professor of Philosophy at both the Kolkata Sanskrit College as well as Kolkata University.   Swamiji had never met or interacted with Sri Sri Babathakur in the later's living form.  However ever since attending the solhavi (i.e. sixteenth day) rites marking the departure of Sri Sri Babathakur’s from His mundane existence, Swamiji has been drawn to, and has closely researched the teachings of the Master, deriving enormous joy from the Master’s volumes of work.   Bapida invited Swamiji to address the gathering.   Given the length of the address, and the risk of misinterpretting both the broad scope as well as the deep spiritual content of Swamiji's message, an audio clip has been attached for readers to partake of Swamiji’s speech at their own pace and to their heart’s content. 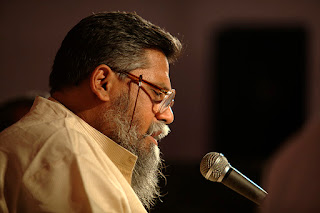 Following Sri Bodas' recital, Bapida thanked the speakers, performers and audience for coming togther to commemorate this very special occasion.   The gathering enthusiastically joined him in chanting 'Joy Babathakur' three times to bring the ceremony to a close.  The attendees were all handed out prasad as they exited out of the seating area, filled with a deep sense of bliss and fulfillment.  A truly spiritually uplifting experience was had by one and all who attended this remarkable event.

Posted by a quarterly spiritual e-magazine. at 12:12 AM